I was writing another blog post focusing on a hanging error in MapR-Streams, and I ended up going into some good detail on the basic architecture of the product.  So, I though it was worth breaking out into its own blog.

MapR-Streams is basically MapR’s version of Apache Kafka.  It is built into their cluster automatically though; it is actually a part of their core file system (along with MapR-DB).

Apache Kafka and MapR-Streams are basically a newer form of message queuing service that is particularly well-geared for big data and extremely high loads (read: millions of messages a per second in many common use cases).

As we dive into more detail, you can refer to this diagram to get a mental picture of how the product is used.  It was taken from a MapR presentation which can be found right here. 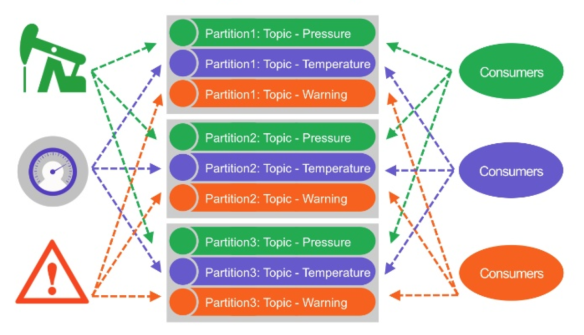 MapR-Streams can be used with a variety of languages including Java, Python, and C++.  It also has a RESTFUL interface which would make it available from pretty much anywhere.

You use the Kafka APIs to send messages to MapR-Streams topics.  There is some one-off code to configure the producer; but after that, it’s pretty must just 1-2 lines of code to send a message from then on.

When sending the messages, you can either:

You can find a full producer example from MapR here (I just referenced code from it): https://mapr.com/docs/52/MapR_Streams/code_for_the_sample_java_producer.html.

When you want to consume messages from a topic, usually the Kafka subscribe API is used (although there is an alternative/older assign API too).

As practical example… If I have 2 Java processes, each with 2 threads having 1 consumer each, then I have 4 consumers running.  If the consumers subscribe to a topic with 16 partitions, it is likely that each of the 4 consumes will end up with 4 partitions.

Again, only one consumer in a consumer-group can own a partition of a topic at a time.  So… if the consumer dies or is shut down, it will release the partition, and another consumer will automatically pick it up (which is totally awesome).  This means that you can have 4 servers reading the same topic in parallel and you can be confident that if one server dies, the other 3 will pick up its share of the load transparently without you doing anything on the client side.

You can find a full consumer example from MapR here (I just referenced code from it): https://mapr.com/docs/52/MapR_Streams/code_for_the_sample_java_consumer.html.